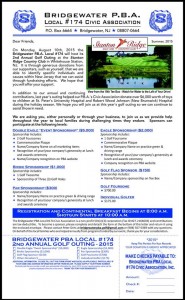 Come take part in our 2nd Annual Golf Outing at the Stanton Ridge Country Club in Whitehouse Station on August 10th! For more information, contact Detective Peter Ochs at 908-722-4111 ext 4144 or at pochs@bridgewaterpd.com. Or visit our Golf Outing page!

BRIDGEWATER, NJ – What could have turned to tragedy became a miracle thanks to the quick response of family members, the Bridgewater Township Police Department and Robert Wood Johnson University Hospital Somerset emergency responders.

On the morning of July 4, 1-and-a-half-year-old Camron Rodriguez, of Somerville, was with his family at a friend’s home in Martinsville, when he and a 2-year-old friend decided they wanted to put bubbles in the pool in the backyard.

The two unlocked the back door and went outside – but Rodriguez slipped, hit his head and fell into the water unconscious.

“The 2-and-a-half-year-old tried to pull him out but couldn’t because he was too heavy,” said Kristin Hartrum, Camron’s mother. “So he came and got me.”

She and her fiancé, Anthony Rodriguez, found their son lying on the top of the water on the steps into the pool.

“I thought it was a doll in the pool, I didn’t think it was him,” she said. “He was on the steps where there is a railing, on the top of the water.”

Anthony Rodriguez grabbed his son out of the pool and started doing chest compressions, while Hatrum administered CPR and a friend inside the house called 911.

County dispatchers Brianna Retsis and Mike Misciagna received the call, and they immediately sent officers out.

“It was the fastest response time I have ever seen these guys get,” Retsis said. “I dispatched the police and it took them less than four minutes to get there from the opposite side of town.”

Bridgewater Township Police Officer Brian Sujansky was first on the scene, arriving in under four minutes from Finderne, followed seconds later by Officer Kurt Bernhard and then Sgt. Chris Fisher.

When they arrived on the scene, Sujansky said, Camron Rodriguez’s breathing was shallow and his skin was blue.

“We gave him oxygen and his color came back,” Sujansky said. “He started crying, which was the best sign.”

“The best result was just hearing him cry,” he added. “From what we came out to to the end result, it was a miracle.”

Camron Rodriguez was taken to the hospital, and spent three days in pediatric ICU before he was released.

“He has no memory loss, no brain damage and he is not even afraid of the water now,” Hartrum said.

The family, which also includes 8-year-old Chase and 5-year-old Cayden, met with the officers and paramedics Thursday to thank them for their role in saving their son.

“At least one officer checked in on us every day,” Hartrum said. “We just want to show our appreciation.”

Anthony Rodriguez was choked up as he spoke to the officers.

“We try to be the best parents we can be, but you can’t ever be 100 percent,” he said. “We are very fortunate. This was an amazing ending because of the response of you guys.”

“We are grateful, and this showed how positive teamwork can be,” he added.

Bridgewater Township Police Chief Manny Caravela said the department appreciates that the family took the time to thank them for the job they do every day.

“When the call is about little kids, it gears us up to respond more quickly,” he said. “There is nothing more gratifying than a day like this where Camron is healthy.”

Hartrum said they just wanted to express their appreciation.
“Thank you to everybody who helped, from our entire family,” she said.